Tradition & modernity meet in the oldest city in Western Europe

Lisbon is Portugal’s capital and the largest city with a population of more than 550,000 people. Its urban area extends beyond the administrative part of the city with a population of around 2.7 million people. Located in western Portugal on the estuary of the Tagus River, it is one of the oldest cities in the world and the oldest in Western Europe.

The oldest quarter in historic Lisbon is the Alfama district. Its names comes from the Arabic Al-hamma, meaning “hot fountains” or “baths”. Contained within this district are many historic buildings including the Se Cathedral, the Castle, the National Pantheon and Saint Anthony’s Church.

A highlight of Lisbon, the 16th-century Jerónimos monastery is one of the great landmarks of Portugal. The stunning monument of immense historic was commissioned by King Manuel I in 1501.

The Ponte de 25 Abril is a suspension bridge of the south bank of the Tagus river and is one of Lisbon’s most notable landmarks. This massive bridge closely resembles that of the Golden Gate Bridge in San Francisco and the date name remembers the Portuguese Carnation Revolution of 25 April 1974. The bridge is 3.2 kilometers long and connects Lisbon on the north bank with the commuter districts of Alameda on the south bank.

Another highlight of Lisbon is the Belem Tower. The city’s icon is also a symbol of the Age of Discovery which was built in the early 1500s. It is a UNESCO World Heritage Monument because of the significant role it played in the Portuguese discoveries.

One of the most famous attractions in Lisbon are the historic tram lines, of which line 28 is the most frequently used. The tram leads through the old town and passes important sights like the cathedral Sé Patriarcal, the Basilica da Estrela and the Jardim de Estrela.

The Lisbon Oceanarium is one of the largest aquariums in the world. The Oceanarium is home to dozens of fish and marine animals, including many of different species of birds. Lisbon’s Oceanarium is divided in to four large tanks that represent the four major oceananic ecosystems that are found throughout the world, with a massive central tank. It is located in the Parque das Nações district of Lisbon and one of the best family orientated attractions. 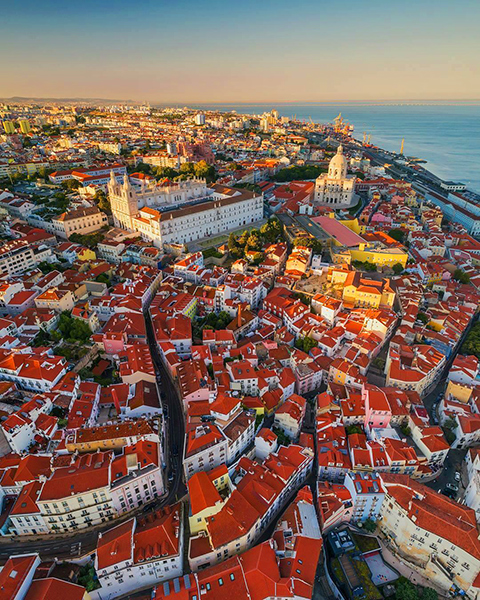